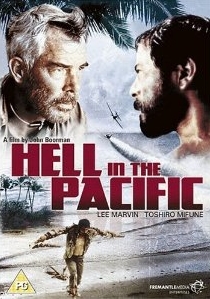 It is 1944 and the war in the Pacific between the United States and Japan is at its height. Forced to crash-land his plane into the ocean, a US naval pilot (Marvin) manages to make his way to a small island, where he hopes to find provisions to help him survive and, eventually, some chance of discovery and rescue.

Expecting the island to be deserted, he is surprised to discover another inhabitant, a similarly marooned Japanese navy captain (Mifune). Natural enemies, the two men initially continue their futile hostilities, regularly coming to near-deadly blows and eventually, by turns, taking each other prisoner. It soon becomes apparent, however, that in order to survive they must cease their fighting, settle their differences and work together, despite the barriers of language and culture. But can suspicion, pride and mutual hatred, be overcome even though a failure to do so must surely result in the death of at least one of them?