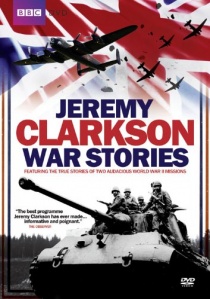 Top Gear's Jeremy Clarkson presents two fascinating and informative documentaries focussing on some of the bravest actions of World War II in Jeremy Clarkson - War Stories. This insightful collection, available to buy from BBC DVD on 31st October 2011, features The Victoria Cross: For Valour and The Greatest Raid of All.

The first of these two World War documentaries examines the history of the highest military decoration awarded for valour in the face of the enemy. In September 1944 at the Battle of Arnhem, Major Cain won what was described as the "finest Victoria Cross of the whole war". Clarkson reveals his story, along with other personal accounts of staggering bravery.

He then follows with the story of one of the most daring operations of World War II - the audacious Commando raid on the German occupied dry dock at St. Nazaire in France on March 28th 1942. The operation had one aim to destroy the dry dock and deny the German battleship Tirpitz a safe haven on the Atlantic coast of France. It was an operation so successful and so heroic that it resulted in the award of five Victoria Crosses and 80 other decorations for gallantry.

HotDVDBDDIGITAL
With stunning revelations, glamorous journeys, and the arrival of the Jazz Age, Downton Abbey: A New Era, released on DVD and Blu-ray 15th August 2022 from Warner Home Video, will be the Crawleys' biggest adventure yet as they grapple with their future and new intrigue about ... END_OF_DOCUMENT_TOKEN_TO_BE_REPLACED
Top PicksView