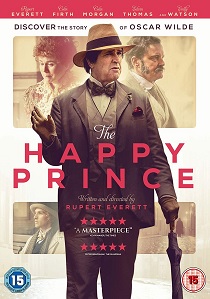 When you're once adorned with fame and reverence, 'there is no mystery so great as misery' for a Happy Prince fallen on hard times. Follow the final, crest fallen days of Oscar Wilde when The Happy Prince arrives on digital download on 8th October 2018 and on Blu-Ray and DVD on 15th October 2018, courtesy of Lionsgate Home Entertainment.

In a cheap Parisian hotel room Oscar Wilde (Rupert Everett) lies on his death bed and the past floods back, transporting him to other times and places. Was he once the most famous man in London? The artist crucified by a society that once worshipped him? The lover who has been imprisoned, now freed, yet still running towards ruin in the final chapter of his life?

Under the microscope of death, he reviews the failed attempt to reconcile with his long suffering wife Constance (Emily Watson, On Chesil Beach, Gosford Park), the ensuing reprisal of his fatal love affair with Lord Alfred Douglas (Colin Morgan, The Fall, Testament of Youth) and the warmth and devotion of friends Robbie Ross (Edwin Thomas, Endeavour) and Reggie Turner (Colin Firth, The King's Speech, A Single Man) who tried and failed to save him from himself.

The Happy Prince is a portrait of the dark side of a genius who lived and died for love in the last days of the nineteenth century. Re-watch Rupert Everett's "Magnificent" performance (Peter Bradshaw, The Guardian) in his passion project this Autumn, as he takes on the role of Writer, Director and star in this "Moving, unforgettable, ravishing and vivid" biopic. (Metro)

Embrace The Happy Prince as it arrives on digital download on 8th October 2018 and on Blu-Ray and DVD on 15th October 2018, courtesy of Lionsgate Home Entertainment UK.