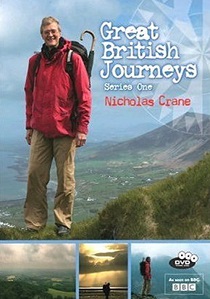 Coast and Map Man presenter, celebrated explorer, writer and broadcaster Nicholas Crane returns to the screen in a brand-new BBC series, Great British Journeys, coming to DVD on 24th September 2007 from Contender Home Entertainment as a three-disc set containing all eight episodes of the series and featuring bonus footage not shown during the TV broadcast.

Combining all the key elements and characteristics that made Coast and Map Man so compelling, entertaining and informative, the series follows Nick as he sets out to retrace - by horse, bicycle and on foot - the journeys made by Britain's greatest home-grown explorers on eight of the most extraordinary adventures of discovery ever made across the British Isles.

From Daniel Defoe's wild adventures through East Anglia to the great medieval journeys of Gerald of Wales, from Thomas Pennant's 18th Century tour of Scotland and Hebridean island hopping to William Cobbett's polemical Rural Rides through the rustic beauty of southern England, Great British Journeys looks at how the chronicles of these travellers informed the public of the day and how the Britain of the past compares to that of the present. Other journeys undertaken by Nick include William Gilpin's milestone exploration of the River Wye, Celia Fiennes' epic 17th century journey on horseback from London to the Scottish border, the Tudor topographer John Leland's 300-mile tour of the West Country and travel writer H.V. Morton's "Search for Scotland" in his Bullnose Morris.

Much like Coast, Great British Journeys is a fascinating and inspiring series about travel, geography, landforms and the ways in which ordinary, everyday people relate to the landscapes around them.

DVD
Released on DVD 4th April 2022 from BBC Worldwide, Golden Globe, Emmy and BAFTA winner Ben Whishaw stars in This Is Going To Hurt, Adam Kay's adaptation of his best-selling memoir about life as a junior doctor. END_OF_DOCUMENT_TOKEN_TO_BE_REPLACED
Top PicksView