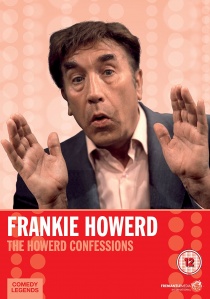 News
News Article Go back to homepage
Four side-splitting series from the golden age of British television comedy make their DVD debuts in September, courtesy of Fremantle Media, with the release of a selection of classic shows and sitcoms starring veteran comedians Frankie Howerd and Tommy Cooper, impressionist Mike Yarwood and comic performer Jim Davidson.
Fremantle Media
Unknown
10/09/2007
Thank you for supporting DVD365.net when you order using the link(s) below. As an Amazon Associate we earn from qualifying purchases
Buy DVD
Information

In defiance of his own funny but futile catchphrases, "Titter ye not" and "Ooh, no, missus", Frankie Howerd unleashes a barrage of bawdy banter and shameless double-entendres in The Howerd Confessions (£17.99, cert. 12) Comprising six half-hour episodes in which the mockingly outraged Howerd relates incidents from his past while chastising the audience for lewdly misinterpreting everything he says, The Howerd Confessions co-stars the First Lady of 'Carry On', Joan Sims, and is a classic from a time when British comedy was in extremely rude health.

Tommy Cooper's Half Hours (£17.99, cert. 12) contains six half-hour shows featuring the inimitable, fez wearing, comic-conjurer at his anarchic best. Complete with his famous bag of tricks and a guarantee to wreak havoc at every step, Tommy Cooper hilariously turns making a merry mess of magic into a virtual art form while still managing to impress with his prestidigitatory prowess' just like that!

The UK's top rated impressionist and one of TV's most popular performers for almost two decades (from the mid-1960s to the mid-1980s), Mike Yarwood was the Rory Bremner, Jon Culshaw and Alistair McGowan of his day, all rolled up into one! The two-disc release, It's Mike Yarwood (£19.99, cert. 12), collects together on DVD for the first time ever the very best of Yarwood's work (Yarwood In Town; It's Mike Yarwood; Mike Yarwood's Christmas Special, The Best Of Mike Yarwood and This Is Him!) from a time when he was at the very top of his game.

Up The Elephant And Round The Castle (£15.99, cert. 12) stars Jim Davidson as Jim London, an out of work, boozing, bird-chasing, Cockney bachelor who inherits a Victorian terraced house and quickly discovers that owning a house can lead to all kinds of farcical scrapes, both legal and otherwise. Co-starring Sue Nicholls (Coronation Street), Anita Dobson (Eastenders), John Bardon (Eastenders), Chris Ellison (The Bill) and Linda Robson (Birds Of A Feather), the series also features music by prog-rocker Keith Emerson of The Nice and ELP fame!

All four titles in the TV Comedy Classics series will be released on DVD by Fremantle Media on 10th September 2007.

DVD
Catherine finally takes the Russian throne for her own - but if she thought coup-ing her husband was difficult, it's nothing compared to the realities of liberating a country that doesn't want to be in The Great: Season Two, ... END_OF_DOCUMENT_TOKEN_TO_BE_REPLACED
Top PicksView