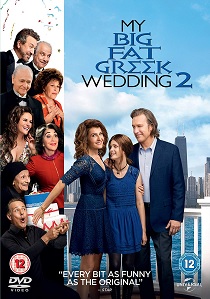 The family you love is back in the sequel to the biggest romantic comedy of all time as My Big Fat Greek Wedding 2 is released on DVD and Blu-ray on 1st August 2016, courtesy of Universal Pictures (UK).

In the years since we first fell for Toula (Vardalos) and Ian (John Corbett), they have raised a headstrong daughter while trying to keep the spark alive. But just as they think they're balancing an independent teen, aging parents and the rest of the irrepressible clan, the reveal of a shocking secret will bring the three generations of this family closer than ever as they plan a bigger, fatter and Greeker wedding!

Written by Academy Award® nominee Nia Vardalos, who stars alongside the entire returning cast, My Big Fat Greek Wedding 2 brings the beloved family of characters back together. The film is directed by Kirk Jones (Nanny McPhee, Waking Ned Devine) and once again produced by Gary Goetzman, Rita Wilson and Tom Hanks.