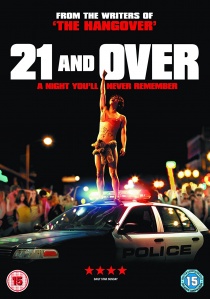 NewsComedy
News Article Go back to homepage
Justin Chon, Miles Teller and Skylar Astin star in the most out of control night ever committed to the screen when 21 And Over comes to DVD and Blu-ray on 9th September 2013, courtesy of Entertainment One.
François Chau, Jonathan Keltz, Sarah Wright, Justin Chon, Skylar Astin, Miles Teller
Scott Moore, Jon Lucas
Jason Felts, Jason Colbeck, Ron Burkle, Robbie Brenner
Entertainment One
1 hour 33 minutes
09/09/2013
#21AndOver
Thank you for supporting DVD365.net when you order using the link(s) below. As an Amazon Associate we earn from qualifying purchases
Buy DVD
Buy BD
Information

Three rising stars of the comedy world collide in the raucous and outrageous new comedy that you'll never forget... if only you could remember it! Justin Chon (The Twilight Saga), Miles Teller (Project X) and Skylar Astin (Pitch Perfect) star in the most out of control night ever committed to the screen. Enjoy irresponsibly when 21 And Over comes to DVD and Blu-ray on 9th September 2013, courtesy of Entertainment One.

Straight-A college student Jeff Chang (Chon) has always done what's expected of him. But when his two best friends (Teller and Astin) surprise him with a visit for his 21st birthday, he decides to do what's unexpected for a change, even though his critical medical school interview is early the next morning. What was supposed to be one beer soon turns into a night of chaos, over indulgence and utter debauchery.

From the writers of The Hangover trilogy, 21 And Over, is the hilarious story of one night you'll never remember!