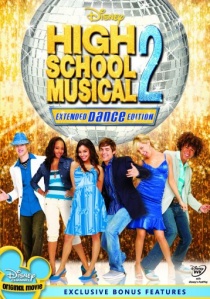 NewsComedyMusicAdventure
News Article Go back to homepage
Disney is giving music mad tweens more reasons to rock out this autumn with the DVD releases of two of its biggest hits! The sensational High School Musical 2: Dance Edition and the show-stopping Hannah Montana: One In A Million both hit stores on 15th September 2008.
Zac Effron, Ashley Tisdale, Miley Cyrus
Unknown
Unknown
15/09/2008
As an Amazon Associate we earn from qualifying purchases
Buy DVD
Information

Disney is giving music mad tweens more reasons to rock out this autumn with the DVD releases of two of its biggest hits! The sensational High School Musical 2: Dance Edition and the show-stopping Hannah Montana: One In A Million both hit stores on 15th September 2008.

Featuring rising stars like Zac Effron, Ashley Tisdale and Miley Cyrus and packed with fab new bonus features, killer tunes, madcap adventures and much more, the Disney DVD "double whammy" is sure to hit the high notes with wannabe popstars and rockers all over the country.

First up is High School Musical 2: Dance Edition - an all new, repackaged Disney DVD containing the second movie in the world's favourite film franchise along with hours of never-before-seen bonus footage - including the first ever preview of High School Musical 3!

School's out for the summer and the Wildcats are in the mood to celebrate! The gang manage to land jobs at the local country club, but Troy's relationship with Gabriella is tested as he is paired with a new singing partner, who will Troy choose as his leading lady?

Those with two left feet should check out the "dance-along" bonus feature which explains the steps to the movie's big song and dance numbers and diehard fans won't want to miss the first ever opportunity to see a sneak peek of the trailer for High School Musical 3 - which doesn't hit cinema screens until later this year.

The DVD also includes a behind the scenes look at the cast in "High School Confidential", an exclusive insight into heartthrob superstar Zac Efron in "The Zac Factor" and the fantastic music video for "All For One".

Hannah Montana: One In A Million

Next up is the latest instalment in the Disney Channel's award winning Hannah Montana series featuring the brilliant Miley Cyrus.

No one has as many "one in a million" experiences as the original Queen of Tween - and the proof can be found in the all new Disney DVD Hannah Montana: One in a Million. Featuring four hilarious new episodes, the DVD sees Hannah embark on more unusual adventures and meet some international pop sensations...

In Lilly's Mom has Got It Going On there's excitement for Hannah and best friend Lilly, as her dad and Lilly's mum go on a date! The episode also features an appearance by country singing legend Dolly Parton!

Elsewhere Hannah receives a top award and catches up with her old boyfriend Jake who's back in town.

Hannah Montana: One In A Million comes with a wealth of exclusive bonus material including the music videos for One In A Million and True Friend. To boot, Hannah's brother Jackson narrates the top ten Disney Channel bust-ups of all time in 'Come Feud With Me'.