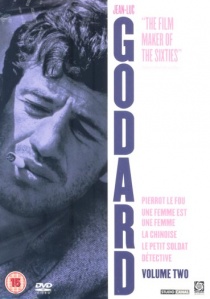 NewsBoxset
News Article Go back to homepage
Cinema's original enfant terrible, one of the leaders of the French New Wave, a key influence on the American cinema of the 1970s and one of the few true auteurs still making movies: Jean-Luc Godard is all of these and more. Now 23rd July 2007 sees Optimum Home Entertainment release volume two of the collection.
Jean-Luc Godard
Jean-Paul Savignac
Optimum Home Entertainment
Unknown
23/07/2007
Thank you for supporting DVD365.net when you order using the link(s) below. As an Amazon Associate we earn from qualifying purchases
Buy DVD
Information

Cinema's original enfant terrible, one of the leaders of the French New Wave, a key influence on the American cinema of the 1970s and one of the few true auteurs still making movies: Jean-Luc Godard is all of these and more. Now 23rd July 2007 sees Optimum Home Entertainment release volume two of the collection.

A maverick force from the beginning, when his debut film A Bout de Souffle (1959) tore up the cinematic rulebook, Godard has continued to inspire and challenge moviegoers throughout a career that spans more than four decades. Born in Paris in 1930, Godard came from a bourgeois Franco-Swiss family, where he attended school until his parents divorced in 1948 and he moved to Paris. A contemporary of Francois Truffaut, Eric Rohmer and Jacques Rivette, Godard first became involved in cinema through literary criticism, writing several articles under the pseudonym Hans Lucas.

After supplying funding to films by Rivette and Rohmer, with whom he had also founded a Gazette du Cinema for their writing, Godard's family withdrew their financial support, and he took to living a Bohemian lifestyle, often stealing food and money when necessary. After becoming a scriptwriter and having made several short films, Godard made his memorable directorial debut in 1959 with A Bout de Souffle, cementing his reputation (earned from his articles and screenplays) as being at the forefront of La Nouvelle Vague. This box-set includes his most overtly political film La Chinoisie, and four films in which the stories centre around a couple in one kind of turmoil or another - whether it be from external perils or personal problems - almost always with tragic consequences for them or those that surround them. Tellingly, all starring Godard's wife at the time. Sometimes barbed, always clever, witty and stylish, a blast of fresh air as much now as they were when first released.

Angela (Anna Karina) is a stripper living in Paris with her husband, Emile (Jean-Claude Brialy), who is a bookseller. She wants a child, he doesn't. Emile's obsession with cycling interferes with the love of his wife. Angela embarks on a dangerous game to try and reignite Emile's passion for her, by involving Alfred (Jean-Paul Belmondo), a good friend of theirs, in her quest for a baby. Alfred is in love with Angela and, it seems, more than willing to be the third corner of his love triangle. Written and directed by Godard, the film was his second, winning both him and his wife Anna Karina awards at that year's Berlin Film Festival.

In 1958, during the Algerian war, Bruno (Michel Subor) deserts and hides out in Switzerland, where he falls in love with Veronica (Anna Karina). However, whilst he is a member of an extreme-right terrorist group, she is a member of a group on the extreme political left, and when his own group suspect him of being a double agent, he is captured and tortured, in a memorably long scene that caused controversy upon the film's original release. As much a meditation on the idea of personal freedom within the constraints of modern day politics as a comment on the Algerian war

Based on Lionel White's novel Obsession, Pierrot Le Fou is the story of a bored husband who runs away from Paris to the South of France with an unpredictable but beguiling young babysitter (Anna Karina) after a corpse is found in her flat. After an idyllic time at the seaside they hit the road once more and get by from stealing, soon becoming embroiled in the machinations of two rival gun running gangs and a man who may or may not be the girl's brother. Belmondo was nominated for a BAFTA for his perfomance in this tragic tale of a romantic couple who cannot escape fate no matter how far they flee.}

A swiftly paced satire that incorporates Godard's advocacy of Maoist principles, La Chinoise may be one of Godard's most explicitly political works, but that doesn't preclude it from also being amongst his most accessible and enjoyable. Largely eschewing a linear narrative to resemble a collage of slogans and conversations, the 'plot' centres upon a small group of Parisian students (amongst them Godard's then-wife Anne Wiazemsky and Truffaut favourite Jean-Pierre Léaud) who discuss the implications of the cultural revolution in China and how it may be possible to effect, by means of terrorism, a similar political and cultural upheaval in the West. Awarded a special jury prize at the 1967 Venice Film Festival.

Amidst the confines of a decaying Parisian hotel, Détective is set in motion when miserably married couple François (Nathalie Baye) and Emile (Claude Brasseur) attempt to collect a debt from mob-plagued boxing manager, Jim Fox Warner (Johnny Halliday). Meanwhile, house detective Laurent Terzieff tries to solve an old murder case. Made in 1985, Détective is a characteristically barbed and witty take on modern morality and popular culture. Playfully riffing on the charisma of its many stars, the film also marked the feature debut of actress Julie Delpy.

DVD
Two lifelong friends find themselves at an impasse when one abruptly ends their relationship, with alarming consequences for both of them in The Banshees Of Inisherin, released on DVD and Blu-ray 30th January 2023 from Walt ... END_OF_DOCUMENT_TOKEN_TO_BE_REPLACED
Top PicksView