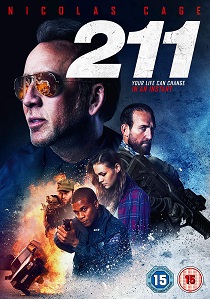 Starring Nicholas Cage (Gone In 60 Seconds, Face/Off) and inspired by one of the longest and bloodiest real-life events in police history ... 211 - which is police code for 'robbery in progress' - is a high octane action-thriller that chronicles what it means to be in the middle of an unfolding crisis situation.

Mike Chandler (Cage) is a life - long veteran police officer ready to finally enjoy his retirement and a well-deserved pension. With his partner and son-in-law, rookie Steve at his side, and Kenny, a 15-year-old court - appointed ride - along reluctantly in tow, they set out on a routine patrol of the city's streets.

The two officers and their young civilian passenger soon find themselves underprepared and outgunned when fate puts them squarely into the crosshairs of a daring bank heist in progress by a fearless team of highly trained and heavily armed men.

BD
In The Duke, released on DVD and Blu-ray 13th June 2022 from Warner Home Video, Kempton Bunton, a 60 year old taxi driver, steals Goya's portrait of the Duke of Wellington from the National Gallery in London. END_OF_DOCUMENT_TOKEN_TO_BE_REPLACED
Top PicksView