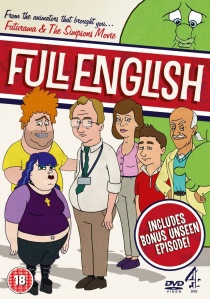 From the producers of Family Guy, The Simpsons and Futurama comes the hilariously funny brand new British animated comedy, Full English, available to own on DVD from 13th May 2013, courtesy of Channel 4 DVD.

The Olympics, the Queen's Diamond Jubilee... 2012 was the year of all things British and we're on a role as 2013 is proving another year to celebrate our great nation. We've got the 60th anniversary of the Queen's coronation plus something big, also worth a patriotic cheer, the release of Full English, a truly great British animated comedy!

On the surface, Full English is about a quintessentially English family, but at its heart it's a satirical look at our popular culture, our celebrities, our monarchy, our economy and our country today. In the tradition of great British comedy, Full English is unashamedly rude, puerile and silly, while telling hilarious stories around identifiable characters.

This is the first UK animation of its type since the highly successful Stressed Eric. Created, produced and written by brothers Harry & Jack Williams (Two Brothers Pictures), each frame is individually designed and drawn by artist Alex Scarfe to give it realistic depth and ensure the show feels distinctly British. The frames are then animated by Rough Draft Studios (Futurama, The Simpsons Movie and Family Guy).

A must have for every comedy lovers DVD collection, Full English also includes an exclusive unseen episode that has never been shown on TV before! 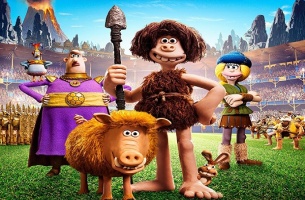 HotDVDBDUHD
Set at the dawn of time, when dinosaurs and woolly mammoths roamed the earth, Early Man, released on UHD Blu-ray, Blu-Ray and DVD 28th May 2018 from StudioCanal, tells the story of how one brave caveman unites his tribe against a mighty enemy and saves the day! END_OF_DOCUMENT_TOKEN_TO_BE_REPLACED
Comments
Hot Pick