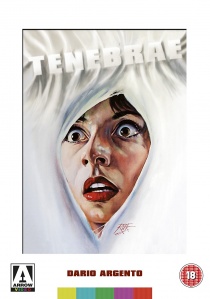 Generally regarded as one of Italian horror maestro Dario Argento's finest films, the terrifying Tenebrae marked the director's return to the "giallo" (mystery-thriller) genre in which he first made his name, after making two supernatural themed films, Suspiria (1977) and Inferno (1980). Banned on video in the UK until 1999, when it was released in a cut form, the film was finally passed uncut and uncensored in 2002. Now, this definitive version of Tenebrae comes to DVD and for the first time in the UK, Blu-ray, boasting a brand new HD restoration of the film and a host of extra features.

Shortly after American mystery-thriller novelist Peter Neal arrives in Rome to promote his new book (the "Tenebrae" of the title) an attractive young woman is murdered by a razor-wielding maniac who stuffs pages of Neal's latest novel into the mouth of his victim before slashing her throat. So begins a bizarre series of horrific murders, the details of which strangely resemble the fictional murders in Neal's book. Baffled by the killings, the local police believe the author may hold the key to solving the case and turn to him for help. Circumstances change, however, when Neal himself begins to receive death threats from the killer.

UHD
The ninth film from the writer-director Quentin Tarantino features a large ensemble cast and multiple storylines in a tribute to the final moments of Hollywood's golden age as Once Upon a Time... in ... END_OF_DOCUMENT_TOKEN_TO_BE_REPLACED
Hot PicksView