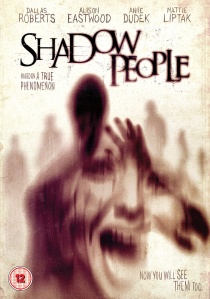 From the producer of The Devil's Rejects - Back in the 1970s several patients in an experimental sleep study reported seeing shadowy intruders. These patients - and hundreds of others - died in their sleep soon after. Doctors called the phenomenon 'Sudden Unexplained Nocturnal Death Syndrome'. They refused to discuss the shadows.

Now a struggling late-night radio host (Dallas Roberts of The Grey and Rubicon) and a skeptical CDC investigator (Alison Eastwood) have begun researching a disturbing new outbreak of shadow sightings and sleep fatalities. Could this be a case of paranoid hallucination or are these victims literally being scared to death by actual nightmare creatures?

Released on DVD and Blu-ray by Anchor Bay Entertainment on 6th May 2013, Anne Dudek (Covert Affairs, House M.D.) and Mariah Bonner (The Social Network) co-star in this supernatural thriller based on true events documenting the authentic existence of Shadow People.

DVD
You ever hear the one about the cop, the blonde, the psycho and the mafia princess? Birds Of Prey And the Fantabulous Emancipation of One Harley Quinn, coming to DVD, Blu-ray and 4K UHD 20th June 2020 ... END_OF_DOCUMENT_TOKEN_TO_BE_REPLACED
Hot PicksView