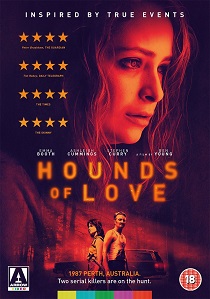 Loosely based on real-life events, this harrowing psychological thriller from Australian writer-director Ben Young is set to join the likes of The Silence of the Lambs as one of the most gruelling serial killer movies ever realised.

In 1980s Perth, Australia, a depraved couple are abducting and murdering young girls. When seventeen-year-old Vicki Maloney accepts a ride from the duo late one night, she finds herself catapulted into a nightmare beyond her imagining.

Bolstered by astonishing performances from its three main leads, released on DVD and Blu-ray 29th January 2018 from Arrow Video, Hounds of Love is a bold and powerful piece of filmmaking which proves that Australian genre cinema is alive and well.

DVD
Released on DVD 4th April 2022 from BBC Worldwide, Golden Globe, Emmy and BAFTA winner Ben Whishaw stars in This Is Going To Hurt, Adam Kay's adaptation of his best-selling memoir about life as a junior doctor. END_OF_DOCUMENT_TOKEN_TO_BE_REPLACED
Top PicksView