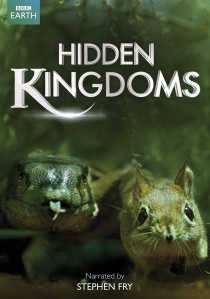 Prepare to be shrunk down and immersed into the magical worlds of fantastical creatures living incredible action-packed lives as Hidden Kingdoms is released on DVD on 3rd February 2014, courtesy of BBC Worldwide.

The stars of Hidden Kingdoms may be small, but they're deadly and able to pack a punch well above their weight. From chipmunks to exploding beetles, they're all at the mercy of elements outside their control, that can blow their world apart in an instant. A sudden rainstorm releases raging torrents that can wash away an animal's homes in seconds; a migrating herd of wildebeest literally shakes up another's 'Hidden Kingdom', leaving it spinning in dust.