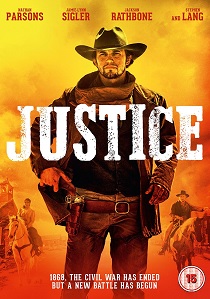 Return to the Old West, where revenge has a new name. U.S. Marshal James McCord attempts to right his brother's murder in the thrilling new film, Justice, available on DVD on 19th Feburary 2018 from Signature Entertainment.

It's 1868 and the Civil War has been over for three years. An old, abandoned mine is now being transformed into a military stronghold by a corrupt mayor and a band of bloodthirsty outlaws hell-bent on reigniting the war. When a U.S. Marshal comes to town only to find out that his brother, the town priest, has been murdered, his search for the killer leads to an inevitable clash that becomes a life or death struggle for a much greater cause.

UHD
Tom Hardy returns as the lethal protector Venom, one of Marvel's greatest and most complex characters in Venom: Let There Be Carnage, available on 4K Ultra HD, Blu-ray and DVD on 3rd January 2022 from Sony Pictures Home ... END_OF_DOCUMENT_TOKEN_TO_BE_REPLACED
Top PicksView