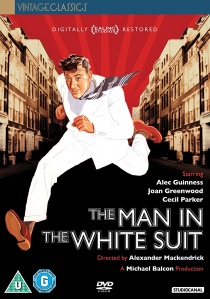 NewsComedy
News Article Go back to homepage
In celebration of the 100th Anniversary of the birth of one of Ealing's greatest directors: Alexander Mackendrick, StudioCanal are very pleased to announce that The Man In The White Suit will be released as a brand new Special Edition DVD and a first ever Blu-ray release on 19th November 2012.
Howard Marion-Crawford, Ernest Thesiger, Michael Gough, Cecil Parker, Joan Greenwood, Alec Guinness
Alexander Mackendrick
Sidney Cole, Michael Balcon
StudioCanal
1 hour 25 minutes
19/11/2012
Thank you for supporting DVD365.net when you order using the link(s) below. As an Amazon Associate we earn from qualifying purchases
Buy DVD
Buy BD
Information

In celebration of the 100th Anniversary of the birth of one of Ealing's greatest directors: Alexander Mackendrick, StudioCanal are very pleased to announce that Mackendrick's The Man In The White Suit will be released as a brand new Special Edition DVD and a first ever Blu-ray release on 19th November 2012.

Sidney Stratton (Alec Guinness, Kind Hearts & Coronets, The Kadykillers, Star Wars), a genius inventor, develops a fabric that never gets dirty or wears out. Thinking that his invention will be welcomed with open arms by the garment industry, he is shocked when both manufacturers and unions alike try to suppress it. Nevertheless, Sidney is determined to put his invention on the market, forcing the clothing factory bigwigs to resort to more desperate measures...

Born in the US to recently emigrated Scottish parents, Alexander Mackendrick moved back to Glasgow with his grandfather after the death of his father when he was just seven years old. He began his career in advertising, then during the War he worked on storyboarding and directing both instructional and propaganda films, in the UK and Europe.

In the meantime he had set up a production company with his cousin, the writer Roger McDougall. After the war they made documentaries for the Ministry of Information until they ran out of money and Mackendrick took a job at Ealing. At first, he worked as a screenwriter and production designer on Basil Dearden's Saraband for Dead Lovers (1948), but it was barely a year before he directed his first film for Ealing: the classic comedy Whisky Galore! (1949).

In all, Mackendrick directed five films at Ealing, out of a total of nine in his career. Four of these five were comedies and include not only The Man in the White Suit (1951) - his second - but also the black comedy classic The Ladykillers (1955). Throughout his Ealing oeuvre, certain common themes can be identified in his films - the struggle of the outsider against community and/or management and his hero often being a naïve innocent unaware of the potentially more destructive consequences of his behaviour - none more so than Sidney Stratton in The Man in the White Suit.

These struggles and misperceptions often form the basis for the comedy and the irony in Mackendrick's films, and it has been said that the role of outsider struggling against superior forces can be seen to reflect his own experiences at Ealing. However, nothing is ever clear-cut with Mackendrick, a quality that gives the films depth and complexity above some of Ealing's more simplistic narratives.

After The Ladykillers, Mackendrick left Ealing as a studio in decline, and spent the rest of his career divided between Hollywood and London, directing one last recognized masterpiece, The Sweet Smell of Success, in 1957, before retiring from making films and becoming hugely respected as the Dean of the Film School at the California Institute for Arts, teaching his craft to many now significant players in the present day film industry.

The Man in the White Suit restoration was completed at Pinewood Studios in high definition using the best original film materials available. After rigorous assessment, the best material for restoration, which was used was the fine-grain inter-positive and scanned in 2k resolution. Over 100 hours were spent to ensure a thorough clean up was performed removing dirt, scratches, warps, tears or replacing torn or missing frames and improving stability issues for the digital restoration, ensuring the general look of the film does not stray too far from the original release. 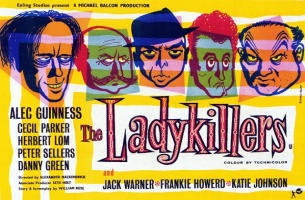 DVD
A 13-year-old girl named Meilin turns into a giant red panda whenever she gets too excited in Disney and Pixar's 25th feature film Turning Red, released on DVD, Blu-ray and 4K UHD 2nd May 2022 from Walt Disney Home ... END_OF_DOCUMENT_TOKEN_TO_BE_REPLACED
Top PicksView