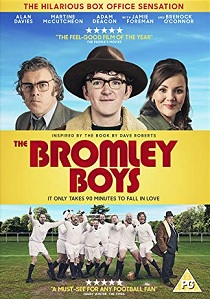 In 1969, with England preparing for the defence of their World Cup crown and George Best delighting crowds with his virtuoso skills at Old Trafford, 15 year old David Roberts fell in love...head over heels in love... with his local non-league club Bromley FC.

Finding it hard to fit in at school he longs to be ingratiated into the inner sanctum of Bromley FC's most loyal fans... but there's a catch... he must lead the way in forcing current team manager Dick Ellis out. While enforcing a bungled one man protest David discovers a secret that will change everything.

David and his new friends are thrust deep in to the biggest story in non-league football history. With furious club Chairman Charlie McQueen on the war path David must choose between his undying love for Bromley FC, the wishes of his parents, and his growing feelings for Ruby, the Chairman's daughter.

BD
After moving to a new town, two brothers discover that the area is a haven for vampires as the classic The Lost Boys is released on 4K UHD 20th September 2022 from Warner Home Video. END_OF_DOCUMENT_TOKEN_TO_BE_REPLACED
Top PicksView