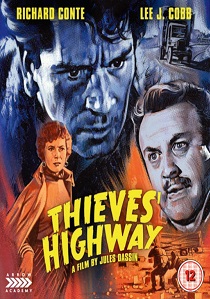 Thieves Highway was made during a remarkable run of noir pictures that confirmed its director, Jules Dassin, as one of the genre's major forces. Following on from Brute Force and The Naked City, with Night and the City and Rififi soon to follow, it more than deserves its place in such hallowed company.

Returning from the war to discover his father has been crippled in an altercation with a brutish mob-connected kingpin, Nick Garcos puts aside thoughts of settling down and instead focuses them on revenge. He buys an old army surplus truck and hits the road a 36-hour non-stop to San Francisco and, he hopes, a little justice...

Starring Richard Conte as Garcos and Lee J. Cobb as the object of his hate-filled intentions, Thieves Highway, remastered and released on dual-format DVD and Blu-ray by Arrow Films on 5th October 2015, is as tough as film noir gets. Adapting his own novel, A.I. Bezzerides (who would later bring Kiss Me Deadly to the big screen) created a slice of pure pulp poetry.

Related Articles
A Walk In The Sun: The Definitive Restoration
The Exorcist: 40th Anniversary, The Exorcist
The Naked City, Rififi
Singin' In The Rain: Ultimate Collection Edition
The Great Dictator: The Criterion Collection
For your consideration 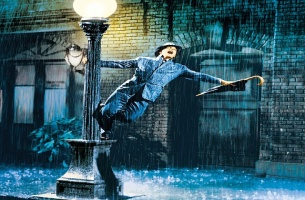 HotUHD
Acclaimed as one of the greatest musical films of all time, to celebrate its 70th anniversary, Singin' in the Rain will be released on Ultra HD Blu-ray 25th April 2022 from Warner Home Video. END_OF_DOCUMENT_TOKEN_TO_BE_REPLACED
Comments
UHD Releases News Pick

UHD
Pixar Animation Studios presents Cars, the high-octane adventure comedy that shows life is about the journey, not the finish line, zooming in for the first time on 4K Ultra HD 19th July 2021, exclusive to Zavvi. END_OF_DOCUMENT_TOKEN_TO_BE_REPLACED
Top PicksView