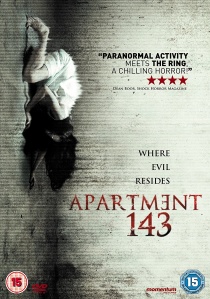 From the producers of Red Lights and Buried, Poltergeist meets Paranormal Activity in the superlative ghostly chiller Apartment 143, released on DVD on 15th October 2012 from Momentum Pictures.

Following the tragic death of his wife, Alan White and his two children find themselves plagued by a series of inexplicable events that eventually force them to leave their home and move into an apartment building in the city. Worryingly, within a week of moving, they once again begin to experience the strange phenomena that threaten to tear apart what is left of their family.

Desperate for answers and, hopefully, a release from what he is beginning to believe is a haunting, Alan requests the help of a small team of parapsychologists experienced in investigating and explaining such incidents. Armed with an arsenal of state-of-the-art technology, the team members set up their equipment and begin a vigil during which they will attempt to solve the mystery. But what they uncover proves to be unlike anything they have ever encountered before.