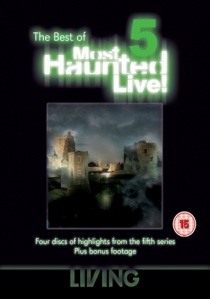 Yvette Fielding and Paranormal Investigator David Mills travel up and down Britain in search of lost souls, as Most Haunted Live! Series 5 debuts on DVD from Contender Home Entertainment on 25th June 2007. Packed with the best bits from the hugely successful Most Haunted Live events this 4 disc edition also includes the behind-the-scenes show Access All Areas.

The Live shows are even more exciting, scary and unpredictable and will have you sitting on the edge of your seat from start to finish. So come and join Yvette and the Most Haunted team as they take you through unexplained paranormal activity at Southsea Castle, the haunted depths of Edinburgh, a ghostly theatre in Liverpool, and much more...

The Live tour starts in Liverpool at The Bluecoat Arts Centre that opened in 1725. This building was bombed in 1941 and then restored 8 years later. Since then the building has been rife with numerous paranormal sightings, also staff claim to have heard talking, playing and crying as well as the sounds of former long-dead tenants. Also whilst in Liverpool, the team go to the Royal Court Theatre, which contains tunnels underneath the 19th Century structure where screams have been heard. There are also more shocking facts revealed and growling can be heard. Crew members sense tingles down their spines and grasping at their ankles.

The team travel to Llanelli in Wales, where they visit the Summer Solstice, an 18th Century house that a maid is thought to have jumped from one of the top floor rooms with numerous sightings of her ever since. A trip to Kidwelly Castle unveils a long varied history dating from the 13th Century so it is not surprising that many visitors have reported paranormal sightings. Apparitions of soldiers, priests and monks have all been seen, but the secrets that Yvette and the team unearth will keep you on the edge of your seat.

They also explore Edinburgh and visit the Blair Street Vaults that were forgotten until they reopened as a tourist attraction in the 1980's. Reports of paranormal activity soon followed. They visit the Niddry Street & Nichols Edwards Vaults, where a circle of stones which lays a curse to whoever enters. The team all become ill at ease when a microphone picks up unexplained sounds from deep within the vaults, and there may well be signs of a witch lurking in the depths.

Whilst in Portsmouth the team go to the Southsea Castle where two members of the team are thrown into a dungeon, locked in iron masks and chains, before experiencing what it feels like to be buried alive. The team take a trip to Wymering Manor, which is the oldest house in Portsmouth and has extensive claims of poltergeist and spiritual activity within its walls.

DVD
An intimate and moving story of childhood memories, Belfast is available to own on Blu-ray and DVD 25th April 2022 from Universal Pictures (UK). END_OF_DOCUMENT_TOKEN_TO_BE_REPLACED
Top PicksView