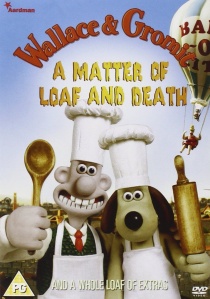 Wallace and Gromit return in their fifth adventure A Matter of Loaf and Death, the highest rating TV show of 2008! Enjoy the spectacular duo in this smash hit released on both Blu-ray and DVD from 23rd March 2009 from 2entertain.

After the fantastic success of Curse of the Were-Rabbit in 2005, Nick Park teamed up with co-writer Bob Baker again for the third time, to produce the plastacine marvel. Sally Lindsay (Coronation Street) guest stars as the voice of Piella Bakewell, and Peter Sallis returns as the voice of Wallace.

Wallace and Gromit have opened a new bakery - Top Bun - and business is booming, not least because a deadly Cereal Killer has murdered all the other bakers in town. Gromit is worried that they may be the next victims, but Wallace couldn't care - he's fallen head over heels in love with Piella Bakewell, former star of the Bake-O-Lite bread commercials. So Gromit is left to run things on his own, when he'd much rather be getting better acquainted with Piella's lovely pet poodle Fluffles.

But then Gromit makes a shocking discovery which points to the killer's true identity. Can he save his master from becoming the next baker to be butchered? And does Fluffles know more than she is saying? It's a classic 'who-doughnut' mystery, as four-time Academy ® Award winning director Nick Park creates a hilarious new masterpiece in the tradition of 'master of suspense' Alfred Hitchcock.

Packed with extras, this fun-packed animation is perfect for the whole family.