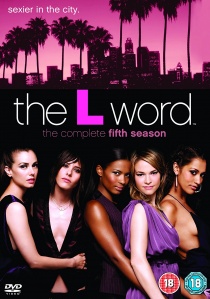 The show has consistently won acclaim for its wit, stellar performances and risqué sex scenes that paved the way for shows to come. Learn more about the characters and go behind the -scenes with Season 5 on DVD. The Box Set contains all 12 episodes and exclusive bonus features; Starring Lez Girls: Season 5 on The L Word and The L Word Defined by the lead actresses, and Music Videos from show band Uh Huh Her'.

Drama quickly prevails, as the hit series begins; the group of beautiful, sassy ladies remain as close as ever, however each one will face their own challenges. Change is in the air for Shane as she swears off sex and reaps the benefits, following a dramatic fall out with Paige. While old feelings linger between Tina and Bette, as they both struggle to move on. Jenny's Hollywood career gains momentum as she returns from a Mexican vacation with a billionaire movie financier in tow, who agrees to fund her film project. Amongst the drama of filming the girls support Kit who must begin her life without Angus, but as the situation unfolds more bad news hits.

Through the tears, trials and temptations of glamorous LA life, friendship triumphs once again in this brand new and enduringly brilliant series of The L Word. The fifth season DVD box is a must have for fans and essential viewing for all those who are just curious

DVD
In Brian And Charles, released on DVD and Blu-ray 10th October 2022 from Mediumrare, an inventor lives alone in a remote village in the countryside, inventing useless things out of found objects in his garage. That is until ... END_OF_DOCUMENT_TOKEN_TO_BE_REPLACED
Top PicksView