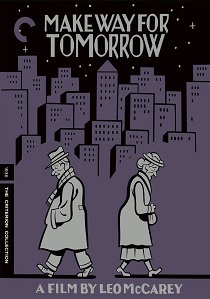 Make Way for Tomorrow, by Leo Mccarey (An Affair to Remember), is one of the great unsung Hollywood masterpieces, an enormously moving Depression-era depiction of the frustrations of family, aging, and the generation gap.

Beulah Bondi (It's a Wonderful Life) and Victor Moore (Swing Time) headline a cast of incomparable character actors, starring as an elderly couple who must move in with their grown children after the bank takes their home, yet end up separated and subject to their offspring's selfish whims.

An inspiration for Yasujiro Ozu's Tokyo Story, this is among American cinema's purest tearjerkers, all the way to its unflinching ending, which McCarey refused to change despite studio pressure.

Make Way for Tomorrow is given the Criterion treatment and released on Blu-ray 25th April 2022 from Sony Pictures Home Entertainment.

HotDVDBD3D-BDUHD
The grave course of events set in motion by Thanos that wiped out half the universe and fractured the Avengers ranks compels the remaining Avengers to take one final stand in Marvel Studios', Avengers: Endgame, released on DVD, Blu-ray, 3D Blu-ray and 4K-UHD 2nd September ... END_OF_DOCUMENT_TOKEN_TO_BE_REPLACED
Top PicksView