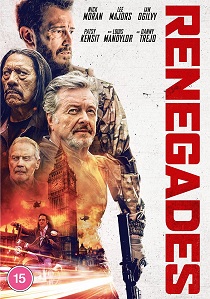 NewsThrillerCrime
News Article Go back to homepage
The Renegades are on the rampage in a brand-new all-action revenge thriller, featuring a stellar line-up of British and Hollywood favourites. This highly anticipated feature from Shogun Films will be released in the UK by 101 Films on DVD 13th February 2023.
Lee Majors, Nick Moran, Billy Murray, Ian Ogilvy, Paul Barber, Louis Mandylor, Patsy Kensit, Danny Trejo
Daniel Zirilli
Jonathan Sothcott
101 Films
1 hour 31 minutes
13/02/2023
#TheRenegades
Thank you for supporting DVD365.net when you order using the link(s) below. As an Amazon Associate we earn from qualifying purchases
Buy DVD
Information

The Renegades are on the rampage in a brand-new all-action revenge thriller, featuring a stellar line-up of British and Hollywood favourites. This highly anticipated feature from Shogun Films will be released in the UK by 101 Films on 30th January 2023, on digital and on DVD 13th February 2023.

Lee Majors plays Carver, a courageous former green beret and true gentleman, who stands by soldiers old and new and helps them in their hour of need. When struggling veteran Nick Moran (Lock Stock) comes to him for support, he does his best to help. Introducing him to his loyal old special forces comrades Peck (Ian Ogilvy), Woody (Billy Murray) and Harris (Paul Barber), they welcome the new-recruit with open arms, living by their ethos of 'You don't leave a man behind even when the war is over and done with...'.

When Carver is shockingly murdered, the ex-army Renegades band together to protect his daughter Judy (Patsy Kensit) and exact revenge on those responsible... a vicious international drug gang, led by the fearsome Goram (Louis Mandylor). They're ready to dispense their own brand of old-school justice on the mean streets of London.

Aided by the enigmatic Sanchez (Danny Trejo), the veterans must stay one step ahead of determined Scotland Yard Detective Moore (Sothcott) and stop Goram's gang from taking their deadly hold on the city.

The Renegades mean business. Cross them, and they'll do anything it takes wreak vengeance with their inimitable old-school style.

There will be blood, violence and bodies galore in this brutally brilliant action-packed feature. 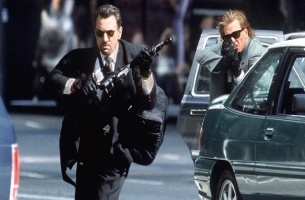 HotUHD
A stellar cast sizzles in Heat, a taut psychological drama about an obsessive detective and a brilliant thief whose fates are linked in the aftermath of a high-stakes securities heist, released on 4K UHD 8th August 2022 from 20th Century Studios. END_OF_DOCUMENT_TOKEN_TO_BE_REPLACED
Comments
Hot Pick

HotDVDBD
From the producers of Nobody and John Wick comes a bare-knuckle, coal-dark holiday action-comedy that says you should always bet on red as Violent Night sledges in on DVD and Blu-ray 6th March 2023 from Warner Home Video. END_OF_DOCUMENT_TOKEN_TO_BE_REPLACED
Top PicksView