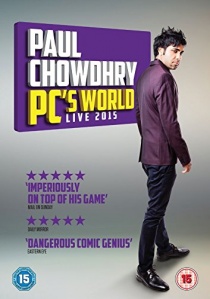 The UK's number one Asian comedian Paul Chowdhry is ready to tackle political correctness gone mad as he hits the stage with his brand new DVD - Paul Chowdhry - PC's World Live. Filmed at a sold out Hammersmith Apollo and released on DVD by Universal Pictures (UK) on 30th November 2015.

PC may be his initials, but the relentless world he lives in definitely isn't. Why do some people find humorous what others consider highly offensive? Why has tackling the preconceptions of political correctness become so contentious?

Paul addresses this issue along with such diverse subjects as the art of attracting women, jokes cut from his TV appearances, non-existent customer services and the now unforgettable 1980's in his own inimitable uncompromising style.

PC's World Live is a must-have DVD for fans of controversial, out-spoken and quick-witted comedy from one of the UK's most notorious comics.