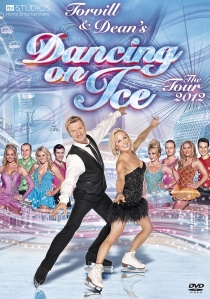 Lights, Camera, Ice Action! Dancing on Ice Live Tour 2012 is the perfect stocking filler for all fans and family this Christmas and is guaranteed to bring magic and sparkle to the sofa.

Re-live all the drama and excitement of the Dancing on Ice Live Tour 2012 - the breathtaking routines, the daredevil moves and the spectacular costumes - all from the comfort of your own home. Skating favourites Torvill and Dean will bring the ice rink into your living room as Dancing on Ice Live Tour 2012 comes to DVD on 26th November 2012, from ITV Studios Home Entertainment.

With some simply magical performances from the undisputed ice-skating masters Jayne Torvill & Christopher Dean, the tour is full of excitement and action with lifts, spins and headbangers to keep you on the edge of your seat. It's Dancing On Ice at it's very best. The action of the ice makes perfect Christmas viewing with stunning routines and costumes making it a fun watch for all of the relatives this festive season.

So don't miss the action as Dancing On Ice Live Tour 2012 comes to DVD on 26th November 2012, from ITV Studios Home Entertainment.

DVD
In The Black Phone, released on DVD and Blu-ray 3rd October 2022 from Warner Home Video, a teenage boy is abducted by a sadistic killer and discovers a phone in his basement cell that allows him to communicate with the killer ... END_OF_DOCUMENT_TOKEN_TO_BE_REPLACED
Top PicksView