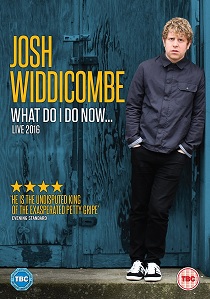 NewsStandup Comedy
News Article Go back to homepage
Recorded at the legendary Hammersmith Eventim Apollo, Josh Widdicombe, that guy from the TV comedy shows with the curly hair, is releasing Josh Widdicombe: What Do I Do Now... Live 2016 on DVD on 28th November 2016 courtesy of Universal Pictures (UK).
Josh Widdicombe
Paul Wheeler
Anthony Caveney
Universal Pictures (UK)
1 hour 10 minutes
28/11/2016
#JoshWiddicombe #WhatDoIDoNowLive
Thank you for supporting DVD365.net when you order using the link(s) below. As an Amazon Associate we earn from qualifying purchases
Buy DVD
Information

Josh Widdicombe, that guy from the TV comedy shows with the curly hair, will be releasing his highly anticipated second live stand up DVD this Autumn. Recorded at the legendary Hammersmith Eventim Apollo, What Do I Do Now... Live 2016 promises the same frustrated wit that Josh has made his own as he talks the audience through matters really close to his heart. Taking fire at everything from his childhood in rural Dartmoor, his curious school days, greetings cards from elderly relatives and the utter peril of turbulence, Josh's ability to turn the mundane into laughter makes this the must have stand-up comedy DVD of the year!

Josh is now a stalwart of the British comedy scene and regularly appears on the most popular comedy and entertainment programmes on our television screens. As co-host of the award-winning Channel 4 show 'The Last Leg ' (with Adam Hills and Alex Brooker), the hit series has gone from strength to strength and been nominated for various awards including a British Comedy Award and a Broadcast Award, while finally winning 'Best Entertainment Programme' at the Royal Television Society Awards in 2015. 2016 has seen the show permantly on our screens with a two-part Australia special as well as two further series, plus the triumphant 'The Last Leg Rio' which aired nightly throughout the Paralympics in September.

Josh's self-penned sitcom 'Josh' aired on BBC3 and BBC1 in November 2015 to much critical acclaim and was a huge ratings success on both channels. The sitcom has recently returned for a highly anticipated second series this September where nearly 2 million viewers combined have been tuning in weekly to both BBC Three and the weekly repeat on BBC One. Recently he has also been seen as a team captain on BBC2's new panel show Insert Name Here, as a regular on BBC2's Mock the Week and QI, BBC1's Live at the Apollo and Have I Got News for You and ITV1's The Jonathan Ross Show. He has also previously been the host on BBC5 Live's legendary Saturday morning sport show Fighting Talk as well as fronting his own show, The Josh Widdicombe Show on XFM.

Josh Widdicombe: What Do I Do Now... Live 2016 is an Open Mike Production. Executive producers are Andrew Beint, Joe Norris and Helen Parker with Anthony Caveney producing and Paul Wheeler as director.

Delivered with his unique Devonion style and trademark humour on show, Josh proves why he is one of the UK's brightest young comedy talents. Josh Widdicombe: What Do I Do Now... Live 2016 is released on DVD and Digital Download on 28th November 2016 and is the perfect DVD for any comedy fan this Christmas.