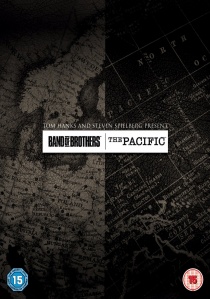 News Article Go back to homepage
Get ready for the ultimate gift this Christmas as the award winning Band Of Brothers and The Pacific, are both released together in a stunning DVD and Blu-ray limited edition gift set for the first time ever on 7th November 2011 from HBO Home Entertainment.
HBO Home Entertainment
Unknown
07/11/2011
Buy DVD
Buy BD
Information

Get ready for the ultimate gift this Christmas as the award winning Band Of Brothers and The Pacific, are both released together in a stunning DVD and Blu-ray limited edition gift set for the first time ever on 7th November 2011 from HBO Home Entertainment.

Ten years after Band Of Brothers first came to our screens, this beautifully packaged limited-edition gift set includes every visually stunning and heart-pounding episode, along with the exclusive to the gift set bonus disc of the never seen before 60-minute documentary "Called to Service" and hours of special features and comes in a fold-out collector's piece.

"Called to Service" includes historian interviews and reunites veterans from Easy Company (European front) and the 1st Marine Division (Pacific theatre) in a conversation revealing their experiences after World War II. Organised in a four-act structure, the documentary captures how these soldiers re-acclimatised to normal life and the transitions these men went through coming back home.

These two critically acclaimed 10-part miniseries, both filmed nearly a decade apart, have won multiple awards between them including fourteen Emmys®, a Golden Globe® and a Peabody. Individually they are two of HBO's biggest selling titles and still prove popular amongst fans and newcomers alike.

Based on the bestseller by Stephen E. Ambrose and made up of an all-star cast including Michael Fassbender (X-Men First Class, Inglorious Bastards), Damian Lewis (Your Highness, The Escapist) and Scott Grimes (Robin Hood, E.R{/I), the epic 10-part miniseries Band Of Brothers tells the story of Easy Company, 506th Regiment of the 101st Airborne Division, U.S. Army.

Drawn from interviews with survivors of Easy Company, as well as soldiers' journals and letters, Band Of Brothers chronicles the experiences of these men who knew extraordinary bravery and extraordinary fear. They were an elite rifle company that parachuted into France early on D-Day morning, fighting in the Battle of the Bulge and capturing Hitler's Eagle's Nest at Berchtesgaden. They were also a unit that suffered vast casualties, and whose lives became legend.

They were ordinary men, swept up in the most extraordinary conflict in history. With the eyes of the world upon them, they found their greatest source of strength in one another.

The ten-part adventure tracks the intertwined real-life journeys of three U.S Marines - Robert Leckie (James Badge Dale), Eugene Sledge (Joe Mazzello) and John Basilone (Jon Seda) - across the vast canvas of The Pacific Theatre of World War II. From the very first scene witness the reality of war with disorientating and historical accuracy, set against a breath-taking and often harrowing backdrop. The series follows these men and their fellow comrades from their first battle with the Japanese on Guadalcanal, through the rain forests of Cape Gloucester and the strongholds of Peleliu, across the bloody sands of Iwo Jima and through the horror of Okinawa, and finally to their triumphant but uneasy return home after V-J Day.

Costing an incredible $200m to create, The Pacific is a cinematic blockbuster for the small screen, representing a revolution in television and further cements HBO's position as a pioneer of innovative and challenging programming.