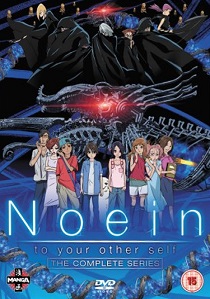 Time bends, space folds and adventure abounds in the thrilling science-fiction anime series, Noein - To Your Other Self, released on DVD by Manga Entertainment on 22nd October 2007.

Directed by Kazuki Akane (creator of Heat Guy J and director of Escaflowne: The Movie), who describes the series as 'anime's version of Stand By Me, Noein - To Your Other Self is one of the most innovative anime productions ever made, featuring over 6,000 animation cels shot per episode (twice the average number for a normal animated TV series), combining both traditional 2-D and state-of-the-art 3-D CGI, as well as a lavish musical score performed by a 40-piece orchestra - a first for any Japanese TV series. It's little surprise that Noein - To Your Other Self immediately became the Number One rated anime series on Japan's Bandai TV Channel when it was first broadcast.

In the near future, a violent battle takes place between two alternate dimensions in space and time - La'cryma, home to the protectors of humanity, and Shangri-La, whose inhabitants are bent on the annihilation of all time-spaces. A group known as the Dragon Cavalry is dispatched from La'cryma on a journey through the various known dimensions in search of the Dragon's Torque, the only thing that can stop the invasion and prevent the destruction of all possible realities.

Back in the earthly present, twelve-year-old Haruka and her friend Yuu are comtemplating running away from their home city to live in Tokyo when, to their shock and confusion, they meet a member of the Dragon Cavalry calling himself Karasu. He not only believes that Haruka possesses the Dragon's Torque but also claims to be an older version of Yuu from fifteen years in the future. In his own time-space, Karasu once failed to save Haruka's life and vowed to protect the Haruka in the present time-space from anyone and anything deemed to be a threat to her. But another being also has an interest in the present version of Haruka, one even more formidable than the Dragon Calvary and the insidious warriors of Sangri-La - the mysterious mask-like figure known as Noein.

A unique, intelligent and thought-provoking sci-fi adventure that brilliantly applies the concepts of quantum physics theory to a slice-of-life human story of a group of kids who find themselves in an extraordinary situation, Noein - To Your Other Self: Complete Series Boxset is a must-see for all anime and science-fiction fans.

DVD
When the world is locked down, they'll find their ticket out in Locked Down, released on DVD 7th June 2021 from Warner Home Video. END_OF_DOCUMENT_TOKEN_TO_BE_REPLACED
Top PicksView