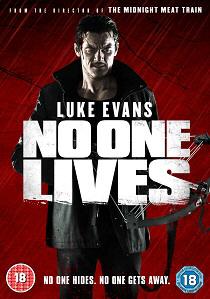 In No One Lives, released on DVD and Blu-Ray by Anchor Bay Entertainment UK on 23rd September 2013, the acclaimed director of "Versus" and "The Midnight Meat Train" concocts a bloody cocktail of the horror, thriller and action genres, and introduces audiences to a brand new horror icon in this smart and totally unpredictable shocker.

Driving across country while relocating from their previous home, an unnamed man and his girlfriend, Betty, stop for food at a remote roadside bar/diner deep in redneck country. A minor run-in with a member of a ruthless criminal gang based in the area leads to the couple being taken hostage and installed in an abandoned farmhouse. But all is not as it seems. When Betty is unexpectedly killed and a shocking discovery is made in the trunk of her car, the tables are dramatically turned when the true identity of her boyfriend is revealed. Soon, the gang members find themselves up against a smart and urbane, but equally ruthless and fearless killer, who adheres to a terrifying personal motto.

3D-BD
The surviving members of the resistance face the First Order once again, and the legendary conflict between the Jedi and the Sith reaches its peak as Star Wars: The Rise of Skywalker is released on ... END_OF_DOCUMENT_TOKEN_TO_BE_REPLACED
Top PicksView