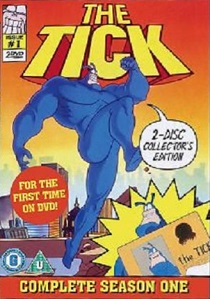 Forget Spiderman and The Fantastic Four, The Tick is a square jawed, muscular, bright blue crime-fighting superhero - with antennae sticking up from his head! His one mission in life - fighting crime in a place simply called The City. The Tick Season One is available for the first time on DVD containing all 13 rib-tickling episodes over 2 discs and is released through Liberation Entertainment.

The Tick is an absurdist spoof of the classic superhero, high spirited, frequently obtuse, and prone to quipping odd, dim remarks alongside inspirational speeches. His superpowers include Nigh-invulnerability - which allows him to crash and bang without injury, Super strength - he can bend a steal girder with ease and Drama-power - where The Tick's powers increase as the situation becomes more dramatic.

The Tick, like every superhero worth his salt, has a trusty sidekick who goes by the name of Arthur (whose voice is provided by The Monkees legend, Micky Dolenz) and together they keep the streets of The City safe from a rogue's gallery of hilariously malevolent villains. Arthur is the brains behind the action, as well as acting as a conscience to The Tick's impulsive actions.

Whether you're a fan of the comics created in 1986 by Ben Edlund, or the television series on CITV from 1992-6, or simply want to keep the kids entertained for a few hours, The Tick has everything you need for serious side splitting entertainment.

Going on to inspire a video game, a live action T.V. series and a legion of fans across the globe, The Tick is THE superhero to own on DVD this year.