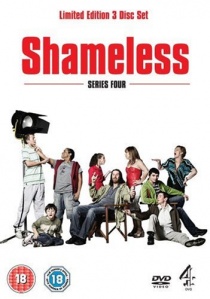 DVD extras include the Take That Sequence Director's Cut, The Missing Scenes, as well a stack of hilarious out-takes. For the first time, Shameless fans will also have the opportunity to now own all four series in an exclusive box set, with over 28 hours of viewing, spread across 11 discs.

Shameless Series 4 sees the favourite colourful characters of the Chatsworth Estate return with a bang, but this time they have two new cops to contend with when witty, smart and sexy Carrie (Amanda Ryan - Attachments) and fresh faced Tom (Michael Legge - Angela's Ashes) arrive to join forces with resident bobby Stan (Warren Donnelly). But the Gallaghers need not worry after teaming up with local gangsters, the Maguires. It's game on when the three Maguire brothers reunite - prodigal son Jamie Maguire (Aaron McCusker - The Rotters' Club) returns from a stint in prison to set sparks flying with Karen (Rebecca Atkinson), while not-so bright Shane Maguire (Nicky Evans - Heroes & Villains) and wannabe hard man Micky Maguire (Ciaran Griffiths - The Bill) are never far behind.

The critically acclaimed and brilliantly funny drama takes us back to the hilarious highs and lows of the Gallaghers - the UK's most dysfunctional family. In Series 4 patriarch Frank (David Threlfall) and the kids are sent into a spin when mum Monica (Annabelle Apsion) turns up, claiming to be back for good. But is the house big enough for her and her lorry driver girlfriend Norma (Dystin Johnson), and where will this leave Sheila (Maggie O'Neill) and the twins? Lip (Jody Latham) is taking his parental responsibilities seriously until thoughts of University offer him the escape route he's always wanted.

Meanwhile, Ian (Gerard Kearns) is content looking for love, while Carl's (Elliott Tittensor) secret crime spree isn't leaving him nearly enough play-time with the girls. Then there's Debbie (Rebecca Ryan), who has decided to interview some potential boyfriends. Carol (Marjorie Yates) is back, but still having trouble keeping her legs and mouth shut, while Kash (Chris Bisson) is happy screwing the council. And what is the connection between Kev, Veronica, Marty, Sue and a Romanian baby?

Throw into the mix kidnap, Al-Qaeda, in-laws and heartbreak and it's life as normal on the Chatsworth Estate as an extraordinary family goes about their ordinary lives!

As Channel 4's most successful drama comedy ever, Shameless is packed with sex, drugs, gratuitous violence, ASBOs, love and scams. It's at its best in the action packed fourth series, available to own ahead of the brand new 16 episode Series 5, set to premiere on C4 in January 2008.

HotUHD
After moving to a new town, two brothers discover that the area is a haven for vampires as the classic The Lost Boys is released on 4K UHD 20th September 2022 from Warner Home Video. END_OF_DOCUMENT_TOKEN_TO_BE_REPLACED
Top PicksView