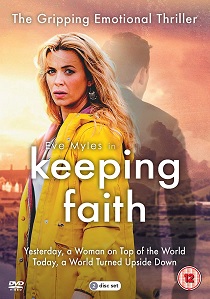 NewsTV SeriesDramaCrimeEve MylesBBC
News Article Go back to homepage
The hidden gem that's been making waves in Wales, Keeping Faith, is set to arrive on BBC One and gets its UK premiere on DVD thanks to Acorn Media International on 3rd September 2018.
Eve Myles, Bradley Freegard, Mark Lewis Jones, Hannah Daniel, Matthew Gravelle
Acorn Media (UK)
8 hours 0 minutes
03/09/2018
#KeepingFaith
Thank you for supporting DVD365.net when you order using the link(s) below. As an Amazon Associate we earn from qualifying purchases
Buy DVD
Information

The hidden gem that's been making waves in Wales, Keeping Faith, is set to arrive on BBC One and gets its UK premiere on DVD thanks to Acorn Media International.

Eve Myles star of Broadchurch and Torchwood, plays the eponymous lead, in this thrilling drama that was filmed simultaneously in English and Welsh. Originally airing on BBC Wales in its native tongue, as UnBore Mercher, the series has become the most popular show on the channel in more than 20 years, and now makes its national debut on BBC One and arrives on DVD on 3rd September 2018.

Set against the stunning backdrop of rural Wales, we meet Faith Howells (Myles), a lawyer on maternity leave after the birth of her third child. When her husband and business partner, Evan (Bradley Freegard - Under Milk Wood), mysteriously disappears, her life is turned upside down.

The stay-at-home, fun-loving, carefree mother must turn detective and powerhouse, taking huger isks to solve the mystery and protect her family. But she soon discovers that her beautiful, idyllic home town, set on the estuary, harbours many dark secrets that threaten the lives of her and the people she loves most.