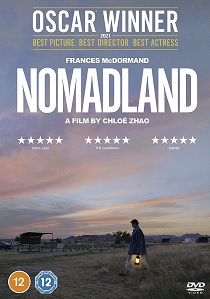 Following the closure of a gypsum mine in the Nevada town she calls home, Fern (Frances McDormand) packs her van and sets off on the road in this "exquisite film" (Joe Morgenstern, The Wall Street Journal).

Exploring an unconventional life as a modern-day nomad, Fern discovers a resilience and resourcefulness unlike any she's known before. Along the way, she meets other nomads who become mentors in the vast landscape of the American West.

From Searchlight Pictures, written for the screen and directed by Chloé Zhao, Nomadland, arriving on DVD and Blu-ray 28th June 2021 from Walt Disney Home Entertainment, is based on the book by Jessica Bruder, the film also stars David Strathairn and features real-life nomads Linda May, Swankie and Bob Wells.