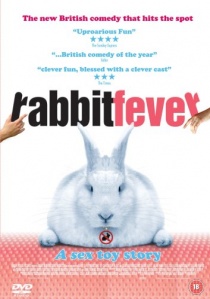 Feel the buzz and get ready to catch Rabbit Fever, released on DVD by Maiden Voyage Pictures on 11th June 2007, the hilariously penetrating mockumentary that does for sexual self-gratification what This Is Spinal Tap did for rock n' roll.

It's that so-called "downside" that forms the thrust of Rabbit Fever, as countless formerly frustrated women are found to be seriously addicted to their two-eared pleasure providers. It's an addiction that causes chaos for the sufferers and results in the sabotage of the sexual self-esteem of men across the globe. As respected intellectuals publicly espouse the Rabbit and its obvious benefits, and airlines begin to provide the buzzing bunny to female passengers as part of their in-flight entertainment, it looks like a new sexual revolution is underway, but as is often the case with any source of addiction, the authorities are determined to clamp down... hard!