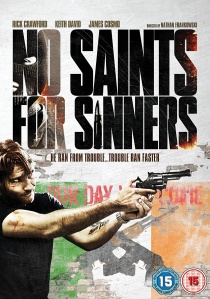 NewsDrama
News Article Go back to homepage
Prepare to get your hands dirty as you find you can never escape the sins of a past life, when No Saints For Sinners explodes onto DVD from 28th May 2012 from Trinity Films.
Michael Dion Thompson, Keith David, Collin Sutton, Kate Tomlinson, Marty Maguire, Ricky Crawford
Nathan Frankowski
Nathan Frankowski, Ricky Crawford, Scott Byrns, Chris Benzoni
Trinity Films
1 hour 20 minutes
28/05/2012
As an Amazon Associate we earn from qualifying purchases
Buy DVD
Information

Prepare to get your hands dirty as you find you can never escape the sins of a past life, when No Saints For Sinners explodes onto DVD from 28th May 2012 from Trinity Films.

The debut feature film from visionary writer/director Nathan Frankowski (Expelled), No Saints For Sinners is a gritty, fast-paced thrill ride that plunges its audience deep into the heart of Ireland's turbulent and violent history.

IRA lifer named Mickey O'Hara (Crawford) has become disenchanted with "the cause;" the IRA used to be an army of freedom fighters, but they've degenerated into an international criminal organisation that makes money selling drugs and training terrorists. When a drug shakedown goes wrong, Mickey is forced to kill his partner. Marked for murder he flees to LA determined to make a fresh start but when a friend runs afoul of some powerful drug dealers, Mickey temporarily resorts to his old ways to help him get out of trouble. However, Mickey unwittingly sets off a chain reaction of events that reawaken the ghosts of his past and threaten to destroy everything.

Proving that you can't teach an old dog new tricks, No Saints For Sinners is the story of one man's struggle to out-run his past and escape the violent end that will ultimately befall him if he doesn't.

Immerse yourself in the urban crime drama that really packs a punch as No Saints For Sinners bursts onto DVD on 28th May 2012, from Trinity Films.

DVD
Disney and Pixar's original feature film Luca, released on DVD, Blu-ray and 4K UHD on 23rd August 2021, is a fun and heartwarming story about friendship, stepping out of your comfort zone and two ... END_OF_DOCUMENT_TOKEN_TO_BE_REPLACED
Top PicksView