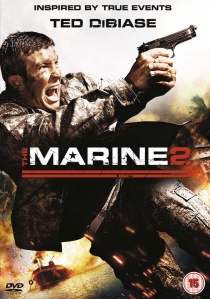 Inspired by the real-life events of the 2001 Dos Palmos incident, The Marine 2 sees Linwood's romantic holiday with his wife brutally interrupted when guerillas take control of a secluded five-star resort and demand a substantial ransom. As the captors start murdering hostages, Linwood must work against the clock and use his skills and experience to rescue the hotel guests and his wife from certain death...

Directed by Roel Reine (Deadwater) and shot on location in Phuket, Thailand, The Marine 2 is a pulse-pounding thriller that is a must-have for any die-hard action fan. Co-starring Temeura Morrison (Star Wars II: Attack of the Clones) and Michael Rooker (Henry: Portrait of a Serial Killer) don't miss The Marine 2 on DVD this spring!