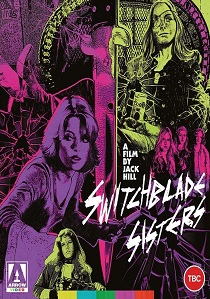 From Jack Hill, the legendary cult director of Spider Baby, Coffy, Foxy Brown, and The Swinging Cheerleaders comes another iconic classic as Switchblade Sisters is released on Blu-ray 19th April 2021 from Arrow Video.

Lace (Robbie Lee), the leader of inner city girl gang the Dagger Debs, meets her match when new girl Maggie (Joanne Nail) moves into the neighbourhood. Mistrust and conflict turn to friendship as the girls end up in Juvenile Detention together at the mercy of abusive guards.

Meanwhile, the Dagger Debs' male counterparts the Silver Daggers have to contend with the arrival of a new gang, led by the villainous Crabs (Chase Newhart). But when the girls get back on the streets, a planned retaliation strike in tandem with the Silver Daggers backfires and puts Lace in hospital.

Maggie assumes control, teaming up with Muff (Marlene Clark) and her gang of African-American militants from across town to declare all out war. But there's a traitor in their midst...

BD
A stellar cast sizzles in Heat, a taut psychological drama about an obsessive detective and a brilliant thief whose fates are linked in the aftermath of a high-stakes securities heist, released on 4K UHD 8th August 2022 from ... END_OF_DOCUMENT_TOKEN_TO_BE_REPLACED
Top PicksView