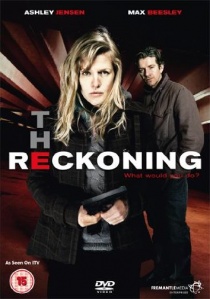 Ashley Jensen (Extras), in her first starring role in the UK following her success in the US TV series Ugly Betty and Accidentally On Purpose, stars alongside Max Beesley (Survivors; Hotel Babylon) and Sophie Stuckey (The Dark) in The Reckoning, released on DVD by Fremantle Home Entertainment on 25th April 2011, a brand new thriller written by Chris Lang (Torn; Lawless), directed by Jim O'Hanlon (The Deep; Emma) and produced by Jeremy Gwilt (The Little House; Monarch Of The Glen).

What would you do for £5 million? And how far would you go to save your only daughter's life? Would you be prepared to kill a stranger? What if that stranger deserved to die?

These are the moral dilemmas facing Sally Wilson (Jensen), a single, working mother and former nurse whose terminally ill teenage daughter, Amanda (Stuckey), urgently requires expensive medical treatment abroad in order to have any hope of surviving into her 20s. Hope for Amanda comes in the form of an anonymous benefactor who offers Sally an "inheritance" of £5 million, to be paid on one condition... Sally must kill a man she has never heard of before; a man named Richard Bury.

Conflicted by having to make a decision that goes against everything she believes in, both morally and legally, Sally shares the burden with her partner, Mark (Beesley), an ex-policeman to whom Sally and Amanda mean everything. Mark agrees to help Sally seek out the man who must die to save Amanda's life. The questions are, when she finds him will Sally have it in her to commit murder and, if so, will there be further consequences?

A tense, edge-of-your-seat, twist-filled thriller boasting a superb lead performance by Ashley Jensen, The Reckoning grabs the viewer's attention from the very start and embarks on a deliciously dark ride that leads to an unexpected but brilliantly satisfying climax.

HotUHD
A decade-defining classic from the imagination of Steven Spielberg and Chris Columbus, celebrating its 35 year anniversary, The Goonies is released on 4K UHD 31st August 2020 from Warner Home Video. END_OF_DOCUMENT_TOKEN_TO_BE_REPLACED
Top PicksView