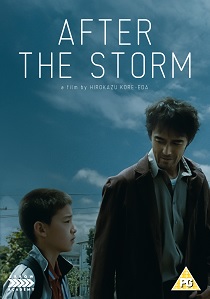 Internationally celebrated filmmaker, Hirokazu Kore-eda's (I Wish, Like Father, Like Son, Our Little Sister) latest film is possibly his most personal yet. Prompted to the write the script after his own father died and seeing how his mother was coping, After The Storm follows a young father trying to rekindle his relationship with his family.

Author turned private detective, Ryota (Hiroshi Abe), struggles to make ends meet as he flitters away all the money he earns on gambling, barely able to pay child support for his son. After his father passes away his mother (Kiki Kirin) seems to have moved on, but family tensions are high with both Ryota and his sister believing each other are taking advantage of their mother. When a typhoon hits, holed-up in his mother's house with his estranged wife and son Ryota attempts to rekindle his relationships with his family.

A sensitive and powerful story of family ties remade, After the Storm, released on DVD and Blu-ray 27th November 2017 from Arrow Films, stands with the best of Kore-eda's work.