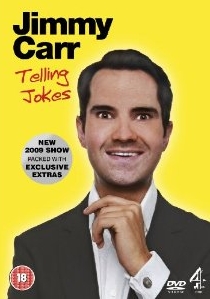 NewsStandup Comedy
News Article Go back to homepage
Britain's most acerbic and satirical comedian, Jimmy Carr, launches marks 10 successful years in comedy with the release of his fifth live stand-up DVD, Jimmy Carr: Telling Jokes, available to own from 2nd November 2009, courtesy of 4DVD.
Jimmy Carr
4DVD
1 hour 35 minutes
02/11/2009
#JimmyCarrTellingJokes
Thank you for supporting DVD365.net when you order using the link(s) below. As an Amazon Associate we earn from qualifying purchases
Buy DVD
Information

Britain's most acerbic and satirical comedian, Jimmy Carr, launches marks 10 successful years in comedy with the release of his fifth live stand-up DVD, Jimmy Carr Telling Jokes, available to own from 2nd November 2009, courtesy of 4DVD.

Featuring 90 minutes of fresh material that's just too rude for television, the new title will see Jimmy Carr at his best; creasing up the nation with relentless one liners and putting down brave hecklers with equal panache. Filmed earlier this year at the Bloomsbury Theatre during his latest tour, the DVD will also feature never-been-seen-before DVD extras including Jimmy's Twitter Diary, a Comedy Central Special and bonus stand up material.

Still holding the crown for the hardest working man in comedy after performing to 300,000 people this year during his Joke Technician tour, Jimmy will celebrate his millionth tour ticket sold this autumn. As well as marking the 10th anniversary since his first paid gig, 2009 is set to be his biggest year to date, as his new Rapier Wit tour continues to sell out and his total DVD sales are predicted to reach one million copies by Christmas.

Jimmy continues to entertain households across the UK each week as the host of the 8th series of 8 out of 10 Cats, one of the UK's longest running comedy series and the most successful comedy panel show in Channel 4 history.

He is a big hit in America, making more appearances on The Tonight Show with Jay Leno than any other British comedian and has been a guest on Late Night with Conan O'Brien ten times. He also hosted two series of Distraction on Comedy Central in the last few years and two half hour Comedy Central Specials. His Canadian following also continues to grow and he received critical acclaim for this year's performance at the Montreal 'Just for Laughs' Comedy Festival.

Jimmy's Writer's Room Podcast became No. 1 on iTunes this year. To date the Podcast has received over 856,205 visits and 1,783,718 track downloads. He also continues to have a huge following on MySpace, Facebook and Twiiter where he amuses his fans with daily quips and updates.

Jimmy has won a host of awards including a British Comedy Award for best Live Stand Up Tour. several Loaded LAFTAS Awards for Best Stand Up, a Perrier Award nomination, Best Stand Up at the Time Out Awards and Best on Screen Newcomer from the Royal Television Society.

Jimmy's other TV accolades include the prestigious Silver Rose of Montreux award and a Rose d'Or nomination for Best Host at last year's awards. He also recently supported the Killers at the Royal Albert Hall during their DVD record.

DVD
The globally renowned Len Deighton novel The Ipcress File, the first in the Harry Palmer series, has been adapted into a six-part series and is released on DVD 18th April 2022 from ITV Studios Home Entertainment. END_OF_DOCUMENT_TOKEN_TO_BE_REPLACED
Top PicksView