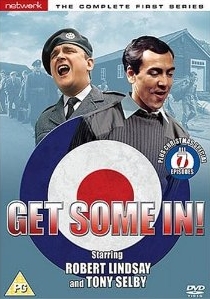 NewsTV Series
News Article Go back to homepage
It is 1955, eighteen year olds are getting their call-up papers for National Service. 13th October 2008 sees Network release the excellent and greatly missed sitcom: Get Some In - The Complete First Series. This is the first time that the complete first series is available in any format.
Lori Wells, Robert Lindsay, Brian Pettifer, Gerard Ryder, David Janson, Tony Selby
Robert Reed, Michael Mills
Robert Reed, Michael Mills
Network
Unknown
13/10/2008
Thank you for supporting DVD365.net when you order using the link(s) below. As an Amazon Associate we earn from qualifying purchases
Buy DVD
Information

13th October 2008 sees Network release the excellent and greatly missed sitcom: Get Some In - The Complete First Series. This is the first time that the complete first series is available in any format.

It is 1955, eighteen year olds are getting their call-up papers for National Service. Embarking on two years in the RAF Skelton are the well-mannered and grammar school-educated Ken (David Janson); tough and cynical Scottish boy Bruce Leckie (Brian Pettifer); London Teddy -- Boy Jakey Smith (Robert Lindsay) who dislikes the whole idea of National Service but who also has a heart of gold; yet another well-spoken, well-mannered and privately educated boy Matthew (Gerard Ryder), who also happens to be the son of a vicar. Unbeknownst to them, what awaits is the forceful and typically tough Drill Instructor Corporal Marsh (Tony Selby) with a sadistic sense of humour, and is gearing up to make the new recruits' lives miserable.

Inspired by the successful The Army Game and the nostalgic Dad's Army, writers John Esmonde and Bob Larbey (Please Sir!) set about writing and creating another show that would emulate the success of the aforementioned army - based series, but from a fresh perspective and revived energy. The result is this RAF -- based sitcom Get Some In, which ran from 1975 - 1978 and was much loved and enjoyed by viewers all over the country.

DVD
Released on DVD 4th April 2022 from BBC Worldwide, Golden Globe, Emmy and BAFTA winner Ben Whishaw stars in This Is Going To Hurt, Adam Kay's adaptation of his best-selling memoir about life as a junior doctor. END_OF_DOCUMENT_TOKEN_TO_BE_REPLACED
Top PicksView