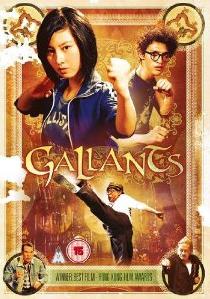 The old school-style kung fu genre is given a cracking contemporary makeover in Gallants, released on DVD by MVM on 25th July 2011, a "witty, hilarious, intelligent" (Twitch) action-comedy and "an admirable homage to an old genre delivered with the best of spirits" (Time Out, Hong Kong), "which captures the spirit of the old Shaw Brothers films" (Sound On Sight).

When legendary kung fu master Law Sun (Teddy Robin) unexpectedly awakes from a 30-year coma he discovers that his once celebrated martial arts school has become a teahouse and is now under threat from a takeover bid by his former rival. Aided by his now middle-aged apprentices, Dragon (Chan Koon Tai) and Tiger (Leung Siu Lung) and an unlikely hero in the form of the nerdy estate agent tasked with progressing the takeover, Master Law sets about training a rag-tag band of fighters to compete in a forthcoming martial arts tournament. Winning the prize could safeguard all their futures, but anything less would mean a certain end for the both the school and for Master Law's reputation.