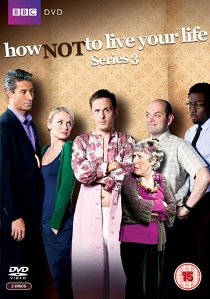 Ever wished life had a pause button with various options for what to do or say next? Do you think you'd say the right thing if you went through each scenario in your head before you uttered a sentence?

Meet Don (Dan Clark - The Mighty Boosh, No Heroics), a man with ambition, a man in the prime of life, a man who manages to mess up even the simplest of tasks. Each episode covers a few days in his life as he stumbles his way through a variety of life's challenges. When faced with any awkward situation Don's energetic imagination gets into gear listing all of the things not to do or say in that situation. Unfortunately, each option seems worse than the previous one.

At the climax of series two Don's luck was about to change as it looked like he was finally going to get it on with his flatmate, Sam. But as we rejoin desperate lothario Don in the third series of this hit BBC Three comedy, it appears that things didn't quite go according to plan, and each day is a trial for Don as he must face up to the fact that he blew his chance with Sam.

To make matters worse, she has a new boyfriend who is everything Don isn't - mature, reliable, clever and not at all self-obsessed. Once more Don has to deal with a fraught love life that involves dates with an aristocrat, a tramp and a really angry woman. On top of that he is sucked into taking part in Top Gun - The Musical, tries therapy and even sells his soul to become a corporate highflyer. But despite all this, he is still no wiser as to how to live his life...

HotUHD
A decade-defining classic from the imagination of Steven Spielberg and Chris Columbus, celebrating its 35 year anniversary, The Goonies is released on 4K UHD 31st August 2020 from Warner Home Video. END_OF_DOCUMENT_TOKEN_TO_BE_REPLACED
Top PicksView