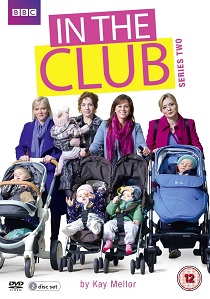 Drenched in drama and featuring an outstanding cast, the second series of the critically acclaimed and hugely popular drama In The Club, from BAFTA winning writer Kay Mellor OBE, creator of The Syndicate, Playing the Field and Fat Friends, makes its arrival on DVD on 13th June 2016, courtesy of RLJ Entertainment's Acorn Label following its run on BBC One.

The all-star cast return alongside new cast members Sandra Huggett (In The Flesh) and newcomer Gemma Dobson in this six-part series which brings more secrets, heartbreak and comedy as our couples juggle midnight feeds and nappy bags with strained relationships, hidden pasts and even death.

Ten months have passed and the six couples who bonded in their local antenatal class are adjusting to life with their new babies. Business woman Roanna (Hermione Norris - Cold Feet), tries to hide her past from her young lover, but as the reality of her decisions start to become all too real for her, it's only a matter of time before they implode.

With her husband Rick (Will Mellor - Broadchurch, Line of Duty) in prison, Diane (Jill Halfpenny - Eastenders) is learning to cope on her own. But as his release draws closer she worries whether their relationship is still going to work.

Blogger and teaching assistant Kim (Katherine Parkinson - Humans) is struggling to be the perfect Mum to baby Emily, whilst her relationship with Neil (Jonathan Kerrigan - The Five) is in jeopardy.

Things haven't got any easier for Jasmin (Taj Atwal - Stella) and husband Dev (Sacha Dhawan - Not Safe For Work) since he left baby Amber in the van. Their overbearing mothers have moved in and refuse to leave - but when Dev and Jasmin receive some devastating news that's the least of their worries.

Life with a baby and a full-time job isn't easy for midwife Vicky (Christine Bottomley - Cucumber) and when things go terribly wrong at work it's a matter of life and death, while schoolgirl Rosie (Hannah Midgley - Emmerdale) is bursting at the seams with her second baby.