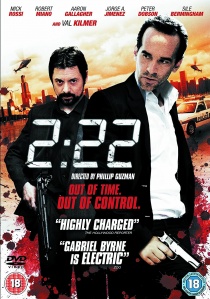 NewsActionRomanceThrillerAdventure
News Article Go back to homepage
Get ready for an action packed adventure as Val Kilmer and Gabriel Byrne take to our screens in the heart pounding crime thriller 2:22 as Momentum Pictures presents this explosive feature that tests loyalty, love, friendship and honour to the max as it arrives on DVD on 24th May 2010.
Val Kilmer, Peter Dobson, Jorge A. Jimenez, Aaron Gallagher, Robert Miano, Mick Rossi
Phillip Guzman
Mike Guzzo, Phillip Guzman, Lenny Bitondo, Manny Barbosa
Momentum Pictures
1 hour 44 minutes
24/05/2010
Thank you for supporting DVD365.net when you order using the link(s) below. As an Amazon Associate we earn from qualifying purchases
Buy DVD
Information

Get ready for an action packed adventure as Val Kilmer (Heat, Top Gun) and Gabriel Byrne (Stigmata, In Treatment) take to our screens in the heart pounding crime thriller 2:22 as Momentum Pictures presents this explosive feature that tests loyalty, love, friendship and honour to the max as it arrives on DVD on 24th May 2010. The film made its European debut at the Cannes Film Festival in 2009 with three sold-out screenings and was chosen for official selection at the 2008 Toronto International Film Festival where it received an overwhelming positive reaction.

Out of time. Out of control. When a tight crew of four thieves decided to take down a boutique hotel in the dead of winter it was supposed to be the easiest hit of their lives until things went horribly wrong. Unsuspecting hotel guests unwittingly play a part in a tangled web. Unusual lives and hard choices intertwine, twisting the scheme to the point of no return.

Hold on to your seats as 2:22 takes you on a thrilling ride into the dark and unpredictable world of the heist.

HotDVDTV
Featuring every episode of the entire series in an 8-disc box set, the hilarious BBC comedy Keeping Up Appearances is released on DVD 28th November 2022 ... END_OF_DOCUMENT_TOKEN_TO_BE_REPLACED
Top PicksView