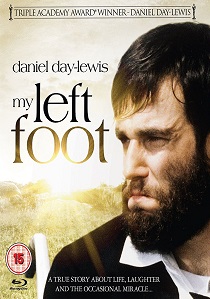 Directed by Jim Sheridan, ITV Studios Global Entertainment is proud to announce My Left Foot, released on Blu-Ray for the first time on 27th May 2013.

Daniel Day-Lewis and Brenda Fricker give Oscar winning performance in an emotional tale of life, love and one family's sense of courage. Based on the true story Christy Brown, this highly acclaimed film depicts his struggle for a normal life. Born with cerebral palsy into a poor, working-class Irish family, Christy was able to control movement in his left foot and to speak in guttural sounds.

With the help of his strong-willed and dedicated family and his own sheer courage and determination, Christy not learns to grapple with life's physical tasks and complex psychological pains, but he also develops into a brilliant painter, poet and author.

Related Articles
Phantom Thread, The Age Of Innocence: The Criterion Collection, Lincoln, Nine
How About You, So I Married an Axe Murderer, Holding
Dream House
Comments
UHD Releases News Pick