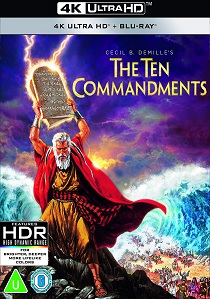 The greatest epic of all time! Throughout film history, Hollywood has produced a number of sweeping epics and generation-defining movies. However, one film - Cecil B. DeMille's The Ten Commandments - has stood the test of time. Universally recognised among critics as a cinematic masterpiece, this unforgettable motion picture has also been recognised by The American Film Institute as one of the "Top Ten" epics of all time.

From its Oscar-winning director and revolutionary Oscar-winning special effects to its memorable music score and all-star cast, The Ten Commandments presents the story of Moses in all of its stunning glory for the first time on 4K UHD on 29th March 2021 from Paramount Home Entertainment.

Starring Charlton Heston, Yul Brynner, Anne Baxter and a "who's who" of legendary screen talent, the film was nominated for seven Oscars, including Best Picture of 1956.

3D-BD
The surviving members of the resistance face the First Order once again, and the legendary conflict between the Jedi and the Sith reaches its peak as Star Wars: The Rise of Skywalker is released on ... END_OF_DOCUMENT_TOKEN_TO_BE_REPLACED
Top PicksView