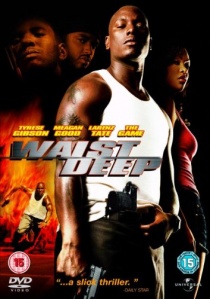 The sizzling cast of this riveting contemporary action thriller includes Meagan Good (Roll Bounce, Brick), Larenz Tate (Crash, Ray) and multi-platinum rapper The Game, in his feature film debut. Director and writer Vondie Curtis Hall (Redemption: The Stan "Tookie" Williams Story) has created a hard-hitting thriller with enough attitude and suspense to keep viewers on the edge of their seats straight through to the spectacular finale. The DVD is loaded with pulse-pounding bonus features and an off-the-hook soundtrack featuring the hottest new songs from some of today's most popular music artists.

Waist Deep is the gripping story of a man in a desperate race against the clock to save his young son. Ex-con O2 (Tyrese Gibson) is a single father trying to make good for the sake of his son. When his vehicle is carjacked with his boy inside, O2 must forsake the law to rescue his son from his kidnapper a ruthless drug lord (The Game) who has a penchant for lopping off limbs. Determined to rescue his child, O2 will try anything, even if it means igniting an all-out gang war.